“Far from the madding crowd”, Wedmore Place is a European-style country hotel featuring 28 uniquely designed rooms and suites. Each room is named and patterned after a different province of Europe and is decorated with antiques and paintings to reflect the culture and history of the region.

Stay with us at Wedmore Place, a traditional European-style country hotel featuring 28 uniquely designed rooms and suites. Each is named and patterned after a different province of Europe and decorated with period furniture and artwork that reflect the culture and history of the region. 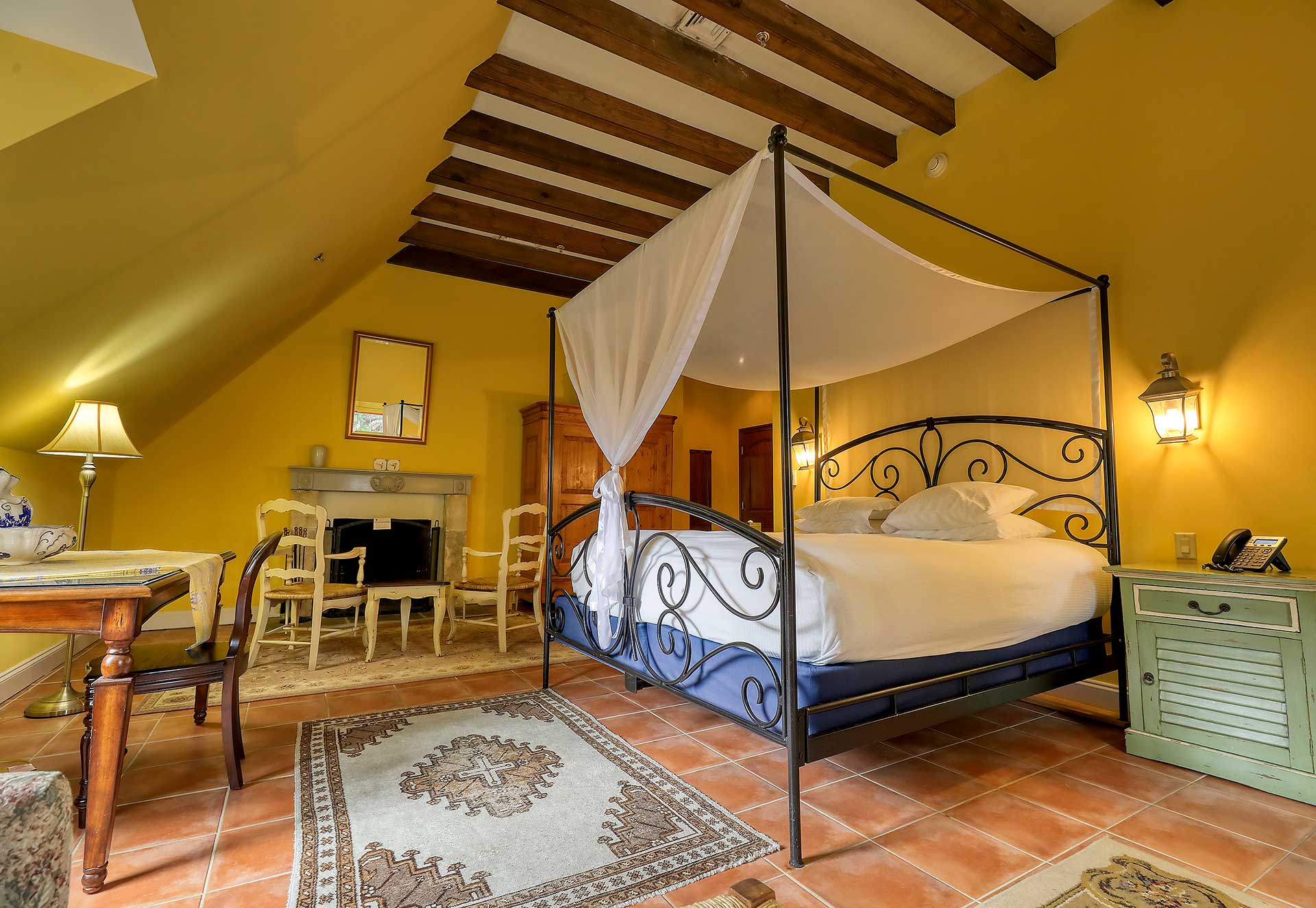 Stay at the Wedmore Place

The hotel derives its name from a 9th century agreement between King Alfred of Wessex and the Danish leader Guthrum to prevent military conflicts. The Treaty of Wedmore established geographical boundaries to promote peace in the area. Patrick and Francoise Duffeler went to travel to Wedmore in 2006 to learn more about the history of Wessex.

Wedmore Place opened in 2007 with Gerald Baliles in attendance, fitting as the former Virginia Governor was also on hand for the launch of the winery 11 years earlier.

The Tradition Rooms are named for Scandinavia, Wales, Bohemia, Bavaria, Tyrol, Gascony, Languedoc, Killarney, Corinthian, Normandy, Ardennes and Westphalia. The larger Classic Rooms are named for Lombardi, Brittany, Piemonte, Champagne, Cornwall, Vienna, Catalonia and Andalucía. The even larger corner rooms are Brandenburg, Castilla, Provence, Burgundy and Cotswold. Three suites with separate sitting rooms range in size from the Tuscany Suite to the Aquitaine Suite to the largest room in the hotel, the 1,100 square-foot Venetian Suite.

Antiques from Scandinavia, Holland, Germany, Belgium, Italy, Spain and France are sprinkled throughout the rooms, suites and lobby. Most benefit from a wood-burning fireplace.

Although it is relatively recent construction, Wedmore Place feels like a warm, cozy country house. A Washington Post review described it as “neither hoity nor toity,” comparing a walk inside to a giant group hug.

Guests rest well here. The luxury linens on the king-sized beds help along with the secluded location among the 400 acres that comprise the winery, most of them wooded green space. A peek out any window offers a picturesque view that invites you outdoors. But feel free to stay in to revel in a slice of European hospitality in the heart of Williamsburg.

Wonderful atmosphere with careful decorator touches to make you feel as though you are a guest in a European country house. Staff was helpful and very friendly. Breakfast with quiche, scones, and fresh fruit was a wonderful start to the day.

Know before you go

Come see the many ways we’ve earned our place on the world wine map.

LEARN MORE
Accessibility Information (If you need assistance in viewing or accessing our website, or have any comments, please call 757-229-0999 or complete our contact form).
We use cookies on our website to give you the most relevant experience by remembering your preferences and repeat visits. By clicking “Accept All”, you consent to the use of ALL the cookies. However, you may visit "Cookie Settings" to provide a controlled consent.
Cookie SettingsAccept All
Manage consent

This website uses cookies to improve your experience while you navigate through the website. Out of these, the cookies that are categorized as necessary are stored on your browser as they are essential for the working of basic functionalities of the website. We also use third-party cookies that help us analyze and understand how you use this website. These cookies will be stored in your browser only with your consent. You also have the option to opt-out of these cookies. But opting out of some of these cookies may affect your browsing experience.
Necessary Always Enabled
Necessary cookies are absolutely essential for the website to function properly. These cookies ensure basic functionalities and security features of the website, anonymously.
Functional
Functional cookies help to perform certain functionalities like sharing the content of the website on social media platforms, collect feedbacks, and other third-party features.
Performance
Performance cookies are used to understand and analyze the key performance indexes of the website which helps in delivering a better user experience for the visitors.
Analytics
Analytical cookies are used to understand how visitors interact with the website. These cookies help provide information on metrics the number of visitors, bounce rate, traffic source, etc.
Advertisement
Advertisement cookies are used to provide visitors with relevant ads and marketing campaigns. These cookies track visitors across websites and collect information to provide customized ads.
Others
Other uncategorized cookies are those that are being analyzed and have not been classified into a category as yet.
SAVE & ACCEPT
Scroll Up